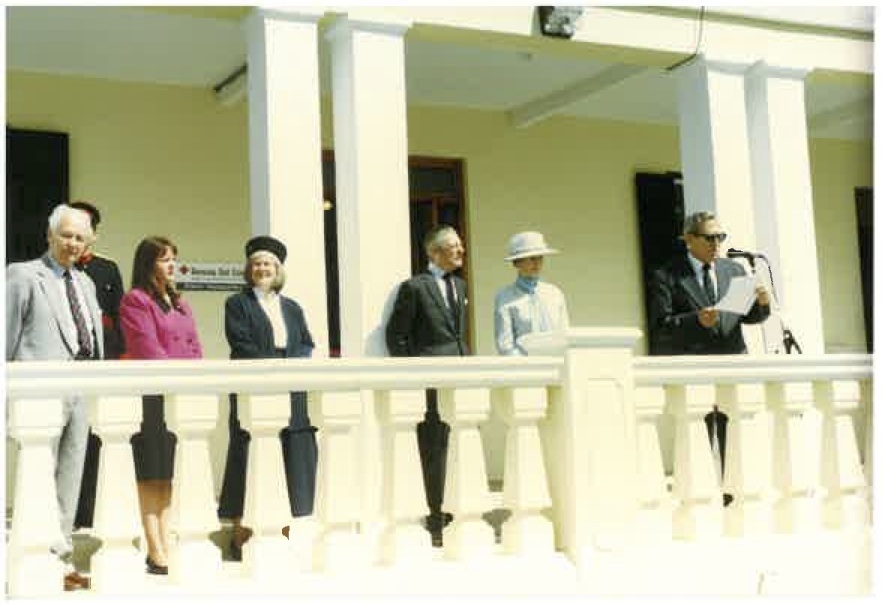 The Bermuda Red Cross was formed on 1st August, 1950 as a Branch of the British Red Cross Society. Originally a Nursing Reserve, it has grown over the years to provide other community based programmes.

In 1955 the late Dr. Everette Shaw, KEMH Pathologist, together with several volunteer nurses conducted an Island wide blood typing project with some 14,000 residents being typed. This produced a Register of over 2,500 Volunteer Donors who were then matched with patients as the need arose. In 1965 when the new hospital opened, Bermuda Red Cross was asked by the Bermuda Hospitals Board to set up and manage a Blood Bank. In 1995 there was a name change to Blood Donor Centre in order to avoid confusion with the hospital lab. Each year approximately 2,300 units of blood are collected and provided free of charge to both residents and visitors. Since 1965, approximately 50 volunteers have offered their services in this area. In 2009 those volunteers (who are on the Inactive Nurses Registry) have had to be replaced by Active Registered Nurses in order to meet the criteria for the Laboratory’s newly acquired accreditation from ‘Joint Commission International’.

Effective September, 2009, Bermuda Hospitals Board and the Bermuda Red Cross moved to paid nursing and technical staff in the Blood Donor Clinic in the Kind Edward VII Memorial Hospital, with on-call volunteer support from the Bermuda Red Cross for emergencies. The Bermuda Red Cross will also continue to promote blood donation in the community. This decision was made by both bodies due to accreditation recommendations and a gradual decline in the number of qualified volunteers.

In 1996 we became the “umbrella” organization for the promotion and distribution of Organ & Tissue donor cards together with information about this life-giving contribution. The Bermuda Organ and Tissue Donor Association is affiliated with the New England Organ & Tissue Donor Bank, and Bermuda is categorized in their #1 priority group. This high priority results from Bermuda’s close proximity and accessibility. Several transplants are done at KEMH by local ear and eye surgeons, and many organs and tissues are donated and received by Bermuda families through the New England affiliate.

In 1967 we started the Hospital Equipment Rental Service that provides all types of medical equipment such as hospital beds, wheelchairs, walkers, commodes as well as children’s equipment for use outside of the hospital. Health Insurance is compulsory in Bermuda so most of the rental cost is recoverable from insurers. To date we have over 700 pieces of equipment and serve some 675 customers. Excess supplies of this equipment are frequently sent to our sister societies in the Caribbean. In January, 2003 this service we relocated to the headquarters property where there is ample storage for the equipment and space for repair work. There are 20 dedicated volunteers assisting in this area.

In 1970, to mark the 100th Anniversary of the International Red Cross, we started our Centennial Transport Service. Volunteers using their own cars provide free transportation to the elderly, needy, handicapped and blind. We drive to the indigent clinic, doctor’s offices, the laboratory, X-ray, Dialysis, and physiotherapy. Each year between 20-25 volunteer drivers make approximately 1,000 drives.

We sponsor the Golden Hour Club, a senior citizen’s group that meets every two weeks for fellowship and entertainment. They have entertainment provided by the various school choirs and bands and enjoy outings to places such as WindReach, the Aquarium, and an annual picnic in the Rose Garden of the Botanical Gardens. There is a membership of approximately 45 seniors and 6 dedicated persons assist the group.

In the area of Disaster Preparedness, our role at this time is to assist with providing supplies in the event of a natural disaster and also to assist the King Edward Memorial Hospital in Mass Casualty disasters. In June each year, we promote preparedness for hurricane awareness week. We are presently working on a community-based disaster risk reduction programme to go into the community to work with the public around vulnerabilities such as building capacity and resilience.

As a Branch of the British Red Cross we are a part of Subregion III of the Americas in the International Federation of Red Cross and Red Crescent Societies. This area consists of the Islands and Territories of the Caribbean and Bermuda. Historically we have come to the aid of most victims of natural disasters around the world. If an appeal is launched by the International Federation of Red Cross & Red Crescent Societies or from the country itself, we will also launch an appeal to the Bermuda public seeking financial assistance. To date just under $4 million has been raised through the Bermuda Red Cross.

Our long-term need has been for a headquarters building. This goal was achieved in May, 1995 when we purchased “Charleswood” at #9 Berry Hill Road, Paget. The building was named Frank C. Gamble, after the long-serving volunteer director. The main offices, training rooms and some storage are on the ground level. There is an apartment that is rented and the thrift shop located on the 2nd level. In 2002 we embarked on a building project to have a purpose-built facility to house our equipment rental service. This building was named after the dedicated volunteer who repaired the equipment and delivered and set up the beds in homes, Fredrick W. Clipper. The building has a business tenance on the upper floor, the equipment rental service on the ground level and additional storage in the baserment. As of December 31st, 2013, we were debt-free and now own the buildings outright.

In 1994 we started a dinner/dance with the themes from countries around the world. These dinners have been both very successful as a fundraiser as well as “friendraiser”. To date the proceeds from the dinners have netted the Bermuda Red Cross $1,187,000 and have assisted in increasing our ability to provide for those in need in our community as well as our profile and volunteer base.